While searching for projects to visit in the easiest way I know, in other words through searching online, I came across a project called Tatamagouche Community Land. It grabbed my attention, not only for its name but for the little information there was about it. It seemed interesting indeed and although it was a little off our path, we decided to visit it. There was no contact number or email address so we decided to go to the address given on the web page. After a bit of a journey, we finally found this community located in the rural part of Tatamagouche, a small town on the North coast of Nova Scotia, Canada.

Upon our arrival, we saw a man taking out the rubbish. When he saw us, he took an interest in us and we told him what our intentions were there. He seemed thrilled by the idea and very willing for us to interview him. What we did not expect was the story of how it all began, which on many occasions helps us understand the end result. A group of friends with a shared worry for climate change decided to embark on a trip across Canada by bike, starting in Vancouver and finishing in Halifax, crossing the country from West to East. As a group of roughly 20, they travelled on bikes accompanied by a bus fuelled with biodiesel. The bus was kitted out with solar panels and loaded with everything necessary for camping, eating and giving talks in many of the communities where they stopped. In these talks, they spoke about climate change, its consequences and how to fight against it. This was in 2001, the expedition lasted roughly 5 months during which they slept in churches, community centres… from what we were told, it was a magnificent experience.

When the trip ended, a few of the group wanted to keep doing activities together to maintain their relationship with the Earth. Wanting to put into practice the things they had learned, they started a new project together. As a result, they decided to buy some land with the intention of creating a community. In order to organise their community, they took inspiration from the Trust Land system. In this system, which facilitates acquiring land for a reasonable cost, you pay a sum of money and you have the right to use the land for 99 years. During this time, at a price which is in line with investment and with the statutes set out by the community, you can assign the rights to use the land to someone else. Under no circumstances are you able to buy the land with the hope of later selling it for a profit as the land does not belong to you, it belongs to the community or cooperative, a set-up which is normally used in a legal sense.

Between them, they were able to buy a large plot of land. At first, they only stayed in spring and summer, living all together in the pre-existing farm. They dedicated their time to planting and producing. After a while, some of the group decided to go and live there on a permanent basis and began to form a family. At this time, they agreed on creating various plots, big enough for each family. When planning how to divide up the land, they kept the farm, their communal home during the first summers, as a shared space. The farm and a few hectares surrounding it were designated as a place for meetings, communal dinners and also as a place where potential visitors could lodge.

Currently, four families live there permanently. This makes a total of eleven people, five of whom are children and youngsters. Each family has their own house, land and source of income, which gives them autonomy and privacy. At the same time, everyone puts money into the communal fund and they pay land taxes and other administrative costs with this money. This money also allows them to maintain their communal areas. They hold official monthly meetings about the development of their land, new ideas and to see how everybody feels. One of the group told us, “it’s not always easy to make joint decisions and on many occasions we have to compromise, understanding another point of view, but it is a great test of solidarity. Another person from the group who makes a living from producing scientific material in the factory placed on his land said, “Before we had a more communal life. Now we have children and everything else, we lead a more individual lifestyle, but we know we can always rely on each other”.

They have spaces available for new families who may wish to come and live there. The project seemed to us to be a great way of creating a community because more often than not, when people think about communities, they imagine a huge group doing everything together with no privacy and having to decide on everything together. In my opinion, they have found the perfect life balance (each family in their own home, directing their own source of income, educating their children as they see fit) through being part of a community where goods are managed communally and joint decisions are made. This all means one can feel like a part of something more than just a nuclear family and experiment with this ancestral way of living in an authentic community.

See the pictures of this project bellow: 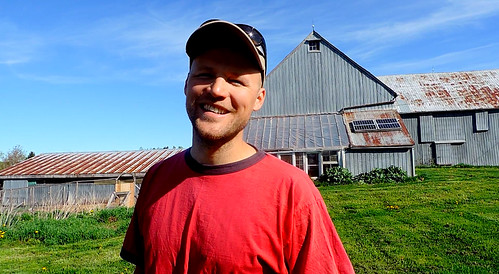 Learn more about this project at:
https://www.sustainability.coop/project/tatamagouche-community-land-trust-co-operative