In the state of New Brunswick in the Atlantic region of Canada, we arrived at the town of Sackville, a place in which a few months ago, we attended the “Conference for Change”. In this small university town there is a fertile, alternative activity and it is also the headquarters of various projects, one of which we visited and left us with a gratifying impression of the Community Forest International (CFI).

The offices are located in an old, yellow building in what used to be the home of the estate owners. Surrounded by forest, with a lake to the front and various well-kept gardens, the place has a fresh and pleasant appearance. Zach received us with a warm smile and led us through a work room, a large space with high ceilings and large windows that provided good natural lighting. It was a magnificent work space. We greeted the team composed of 6 people; thereupon we exited to the garden and seated ourselves in the grass ready to begin the interview.

They were a group of friends that dedicated themselves to planting trees, working for large companies in devastated areas with the intention of reforestation. Over the years, they begin to notice that the type of planting they were implementing and the business vision of the people with whom they worked no longer satisfied them. They believed they could do things another way.

They took advantage of their free time to travel the world and learn different ways of understanding agriculture. After returning from various trips, they decided to found their own charitable organization with the objective of helping deforested regions replant trees. They obtained some funding and began their project on Pemba Island in Tanzania, a place where some of them had traveled and observed its alarming situation. It is an island with a high population density, totally dependent on firewood to cook, heat water…, for which deforestation is concerning and worsening the most notorious effects of global warming at the same time that it affects the lack of water and natural resources.

The members of CFI went to Pemba with the intention of speaking with the communities. Instead of imposing what they going to do, which was common in many cases, they asked the interested communities what species they would like to plant, what their intentions and primary needs were, food, firewood, shade…after assessing what to do, they began to work together with local people, teaching them how to do it, creating that very important relationship of trust andgiving them the knowledge to make it possible and the responsibility of maintaining it. Indeed, the idea is that they are the ones who will implement it, without the need for some outsider to constantly monitor the process.

The project was a complete success. They began with 15 communities and upon seeing the results others joined; they saw the results of forests growing again in those communities and realized their own importance in the development and sustainability of their community. “After they saw the shade that the trees created, the fresh and damp environment they generated and the animals that began to appear which had not been seen for many years, some of the communities that wanted trees for firewood decided that they did not want to cut them down because they preferred the trees alive,” Zack told us. Such was the impact they caused in the region that a commission of the European Union saw what they had achieved and were impressed because they had done a more efficient job with better results than projects the European Community had sponsored. Thus, they decided to give them a grant to continue developing the project in other communities and conducting new stages. With this money, they created systems to collect and store rainwater, which was more abundant with the presence of the forests since trees “call” for rain and with which the population had water to drink and irrigate. They incentivized the agriculture of the area with permaculture principles, resolving nutrition and food scarcity problems. Now they are working to implement photovoltaic stations in order to generate a little electric energy to illuminate houses. They are a perfect example that if one works hard and believes in what they do, often appreciation will come from places you had never imagined.

In Canada, they are working on the implementation of edible forests in the city, but above all, teaching and contemplating new methods of agricultural practice in the region, using permaculture, agro-forestation, and biodynamics in order to create a local and organic agriculture that gives another perspective of life in the countryside. At the same time, they have a plot of land that they use as a laboratory of ideas, either for agriculture, testing new methods of planting, combination of plants… or to build with natural materials, where people can go, express the idea they have and develop it. Every year they organize an event where they present everything that was invented that year and hold a competition, incentivizing more people to go and see and [sic] come into contact with this new but at the same time ancient method of construction.

Its organizational form is conventional because by being a charitable project they must maintain a certain structure, project director, technical staff… but in practice, they are a group of friends that make decisions collectively, where all opinions are heard and valued from start to final consensus. In order to be able to continue developing its projects; “We have always had people supporting us, acknowledging our work, but it is hard to have to constantly suffer in order to be able to guarantee continuation into the next year. Initially, we did it voluntarily, sometimes having to contribute money from our own wallet, but a time arrived when it no longer possible to work on other things, to be able to pay for our project.” Zack told us. On the parcel of land with the laboratory there is a large orchard and they sell part of the harvest but it is not sufficient to carry the projects forward. They hope to one day be self-sufficient, but what they do know is that they will continue conducting new projects, and continuing with those already begun, with the hope of being able to reach more places, growing and helping more corners of the planet that are at risk.

It was very uplifting to see this group of youth working with such clear ideas and a philosophy of well-structured and effective direct cooperation. As they themselves said, these types of practices can be replicated in other places and by other projects, as long as they are open to help and show how to do so. It all has to do with getting your feet wet and beginning to achieve that which we dream of; we think that it can be beneficial for us and everyone else.

See the pictures below: 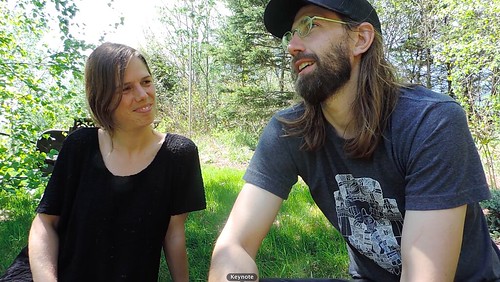 Learn more about the project in:
https://forestsinternational.org/